“Those who cannot remember the past are condemned to repeat it.”
– George Santayana

It’s one thing for bad stuff to happen; it’s another thing to not learn when bad stuff happens.

This year - and these past few weeks especially, amidst FTX and Twitter and inflation and market downturns and layoffs - has been full of lessons for me. So I'm back behind the keyboard to share what I'm learning. 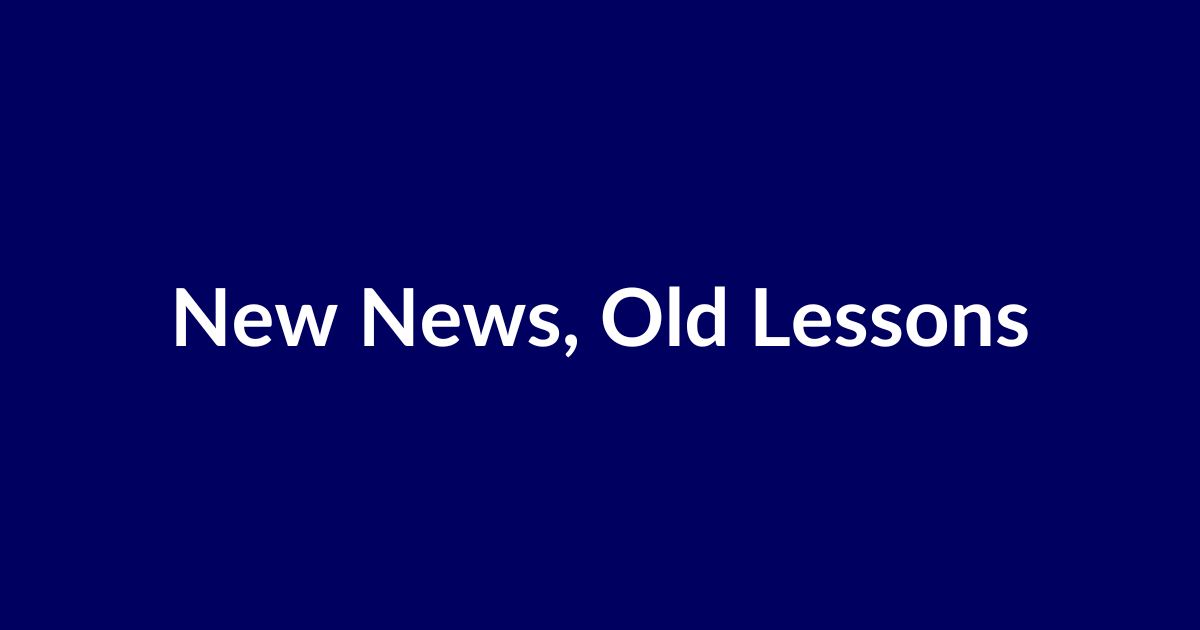 I was recently asked to speak to an impending university graduate about their future, and while I think I had particularly good advice to share from my own experience, I knew that 22-year-old me would not necessarily listen to or value the opinions of 32-year-old me. 32-year-old me still finds myself in a similar situation, where someone may explain something to me that I won’t fully understand until a certain set of lived experiences hard codes that lesson in me.

For example, I know what a recession is like, intellectually, but I’ve never really lived through one. At the time of the 2008 recession, I was graduating high school and starting my first year of university. I have had to live through certain experiences in order for the advice I had previously received to truly hit home and make sense. And it’s happening today as I - and many others like me - experience new market dynamics for the first time.

It’s a frustrating reality of how we learn. (I would imagine it’s even more frustrating to watch for those with more experience, who can see clearly the same mistakes being made.) While I often find that there’s no substitute for experience and that the best lessons are hard-learned, there are still ample lessons to learn if we just paid better attention to history.

The recent collapse of FTX, for example, has given some people an opportunity to say “I told you so”. On one hand, those coming from banking are pointing to the exchange’s use of their token, FTT, as collateral as something that traditional finance has known is a terrible idea for a long time. While on the other hand, hardcore DeFi enthusiasts are saying this is what happens when you put your trust in a centralized platform that can, say, lend its deposits to its sister hedge fund without the consent of its depositors. We knew this stuff, intellectually, yet depositors still trusted FTX to the tune of billions. And unfortunately, there’s no better way to learn than to lose thousands or millions (or billions) of dollars.

It’s been a crazy few weeks for tech - between FTX and concerns about Twitter’s imminent collapse and high-volume layoffs, amidst high inflation and a global market downturn. We’re here now, for whatever the reasons. And what’s most important now is that we’re learning for the future.

So, what are the lessons?

Here are a few, through the lens of the African tech ecosystem, in particular.

Back in April, TFN #98, I wrote about so-called founder friendliness, in an era in which the nexus of power has shifted towards the entrepreneur.

In Silicon Valley, on one hand, the pendulum of power has swung firmly to the side of the founders. It’s a function not only of immense value creation by tech founders and their companies over the past 10-15 years, but also a frothy macro context made possible by ZIRP, or the US’ zero-interest-rate policy. In short, as interest rates dropped and money chased yields – and simultaneously, as tech cemented itself firmly in the center of the US economy – a significantly increasing amount of money has flooded into venture… But as this Silicon Valley-induced perspective tends to extrapolate to the African tech ecosystem, as well, the question is to what extent that’s appropriate in our markets.

The bull market was a set of market conditions that led to less diligence, less governance, higher valuations, and more. But since April, in a higher interest rate and downturned market environment, that’s all come crashing down.

Obviously, strong governance is better than weak or no governance. It’s easy to say, in hindsight, that stronger governance could have prevented the FTX catastrophe, or that it would have led to fewer startups losing their money to FTX contagion, or that we would have experienced fewer accusations of impropriety in the African tech ecosystem as a result.

But while we’ve known, intellectually, the importance of governance, we’ve seen this year, in practice just how important it is.

Perhaps the pendulum is swinging back to investors, but founder friendliness and good governance are not mutually exclusive.

High valuations have been, to a large extent, a function of supply-demand curves driving up price. Meanwhile, in the African tech context, we’ve seen a pullback of growth-stage capital from foreign investors who, in this changing environment, are choosing to focus on their home markets. Where is the growth capital going to come from? And how does this inform the near-term strategies for growth versus profitability?

A more uncertain path to 9-figure rounds and 10-figure valuations should also have implications at earlier stages. A few months prior, I felt less concerned about valuation, instead thinking that investors’ concerns about price are self-serving, from an ownership perspective. However, I see more clearly now how pre-seed and seed startups seeking to maximize their valuation early in the life cycle are setting themselves up for increased difficulty in more austere and lower multiple environments.

To be sure, I think high(er) valuations can be a particularly useful tool in garnering additional interest from prospective investors, partners, and employees - to get the flywheel spinning. Having more money in the bank makes it easier to raise cheaper debt too.

But the key is to be able to tell the difference between different market conditions, and adapt with the changing winds. While we laud fast growth, sustainability is the word of the moment - particularly in African markets where there are still open questions about TAM and the depth of markets.

I think the overton window of risk has shifted considerably - perhaps an understandable outcome of a bull market, where the number always goes up, and has continued to go up for a really long time. But that shouldn’t preclude us from diversification and adherence to the basics, particularly when it’s other people’s money.

At the same time, I’m thinking more about risk through the lens of short- versus long-term tradeoffs. Sure, it’s boring to invest in safe, low-yielding assets, especially in a bull market. The perception of risk in using a crypto exchange’s lending offering for 5-10% yield may have been low. But what’s the end goal, for founders in particular?

In reaction to the FTX situation, Bitnob’s Bernard Parah wrote,

There was a lot of rehypothecation going on in the industry. Who would they give our Bitcoin to? How do we get it back if they go bust? 10% yield didn’t seem worth it. Most of the yield comes from 2-3 large players.

This is also an opportunity to revisit our mental models entirely.

As Collaborative Fund’s Morgan Housel argues, “The biggest economic risk is what no one is talking about”. That which we always talk about - monetary policy, trade, elections - are things we can see coming and prepare for. Instead, “the tail-end consequences – the low-probability, high-impact events are all that matter”.

If tail-end events are all that matter, and we have an expectation that something will happen, we can be prepared, and with room for error.

These lessons aren't new. They've been a part of the African tech discourse for as long as I've been around. The events of this year have reminded us indeed why we've been talking about them for as long as we have.

This isn't the first nor the last market downturn. The tourist dollars that have left will come back again (and then leave again). What will we have learned from this cycle? And will we be prepared for the next one?